Paralog 8.5 adds a workaround for the N3/Atlas 'Date Overflow Bug'.
The FlySight S/N is now read from FLYSIGHT.TXT on the unit.

Paralog 8.4 adds support for the ProTrack II by Larsen & Brusgaard.
Wind information is uploaded to PPC.

Paralog 8.3 adds support for Windows 10 and removes most of the limitations on the trial version. Tracks are now downloaded in full resolution and can be uploaded to PPC as an unregistered user. Registered users can administrate their PPC tracks (e.g. make them private) and user profile. Speed Skydiving is supported on PPC.
Wind is calculated automatically from FlySight tracks (requires a constant TAS circle to be flown between 2000-3000m on the way to altitude).

Paralog 8.2 adds support for the Atlas by Alti-2.

Paralog 8.1 focuses on supporting the extended capabilities of the FlySight GPS Logger: 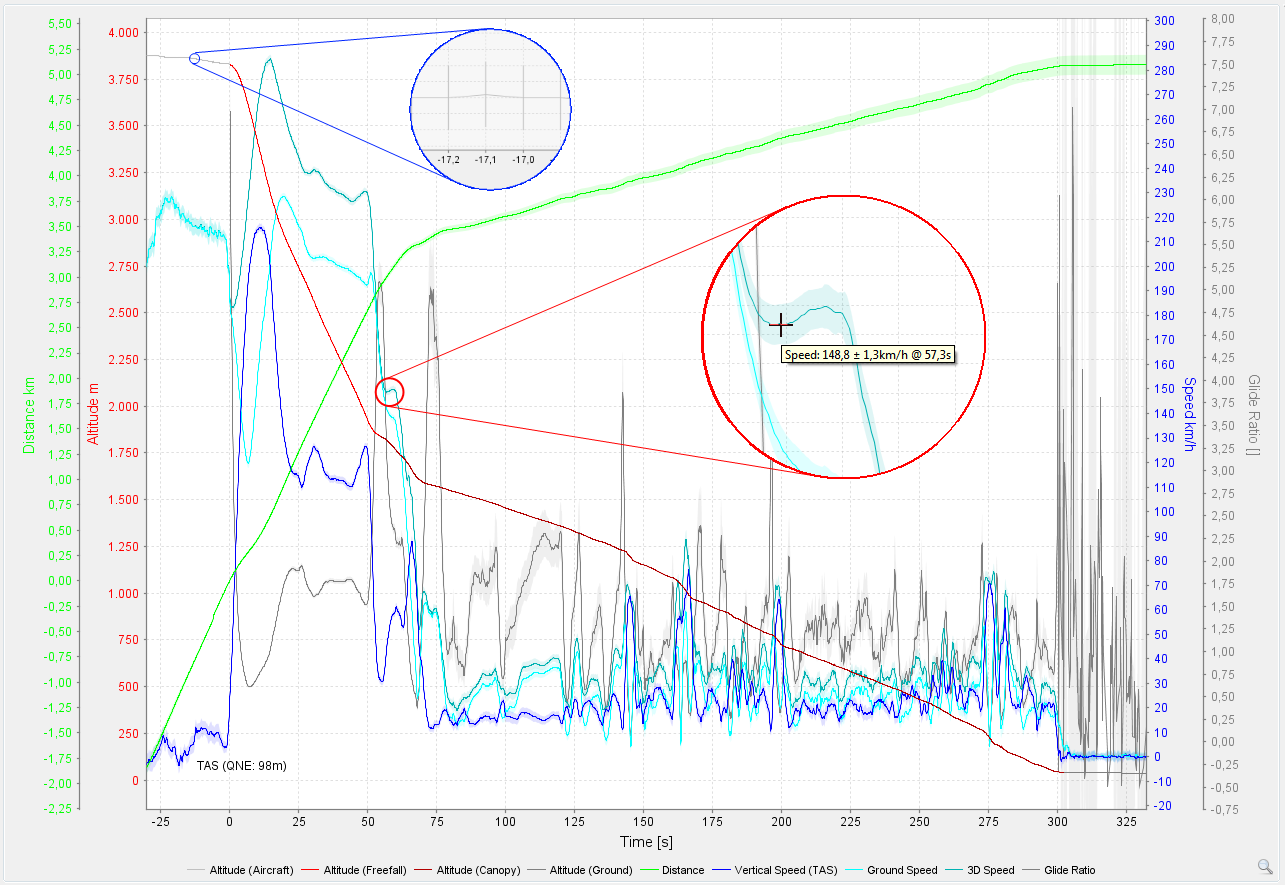 One year after the last release of Paralog, a new major version has been released. The focus of this release is support for the latest Operating Systems (Windows 8.x (32 and 64bit - Desktop), OSX Maverick (64bit), Linux 14.04 (including 64bit)), for the enhancements of the latest Java Runtime Environment (Java 8), a new video engine with instruments overlay and support of the latest release of the Skydiving Logbook App available for Android and iOS.

Another major addition to Paralog 8 is the integration of Alti-2's 'Neptune Maintenance Utility' (NMU), available from Alti-2.

We have reached an agreement with Alti-2 to include the functionality of the Neptune Maintenance Utility (NMU) into Paralog.

This will combine setup, configuration and update capabilities for the whole line of Neptune products (including Neptune 2 and N3(A)) with the existing downloaded and display of Neptune jump logs already available for Windows, OSX and Linux.

A free Online GPS Viewer with support for FlySight and GPX tracks has been made available online by Paralog.

The viewer offers automatic exit/open/landing detection and track analysis as seen in Paralog.

Note: Please be aware that the viewer uses a reduced resolution and simpler algorithms than Paralog for performance reasons. Results may therefore differ. 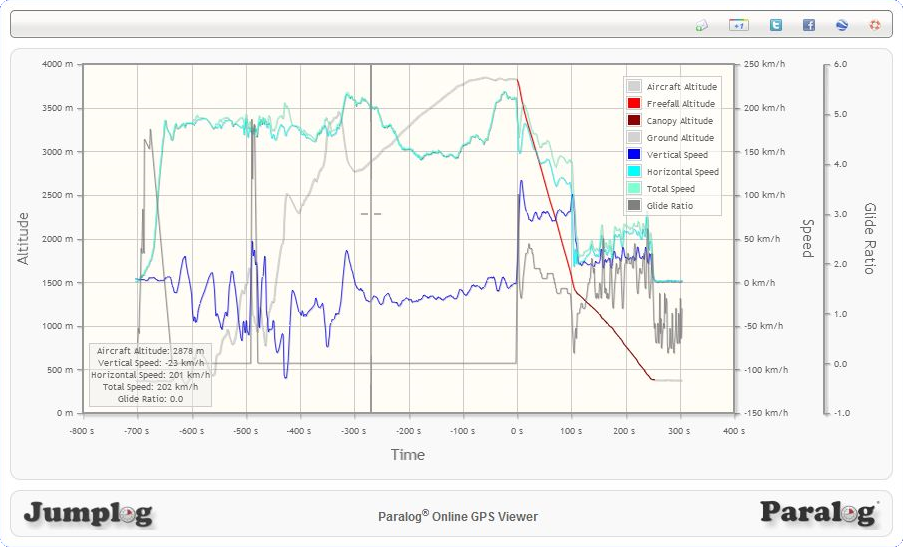 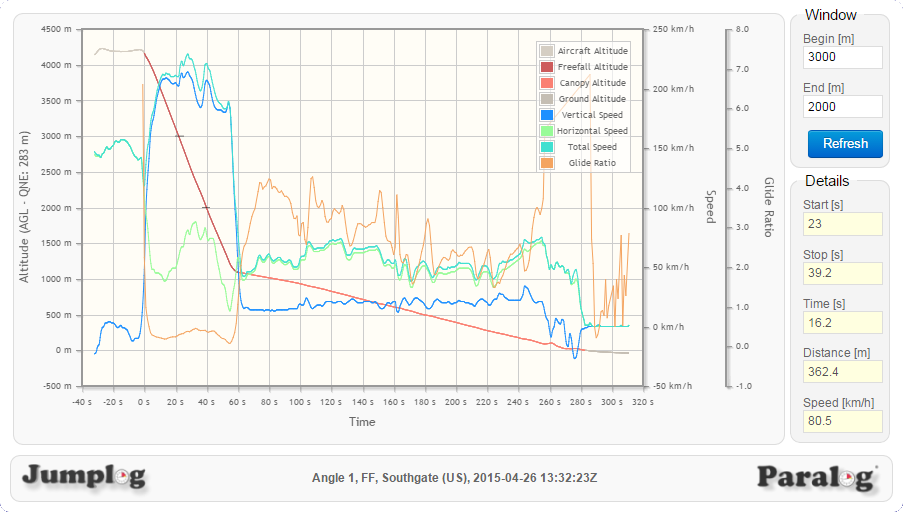 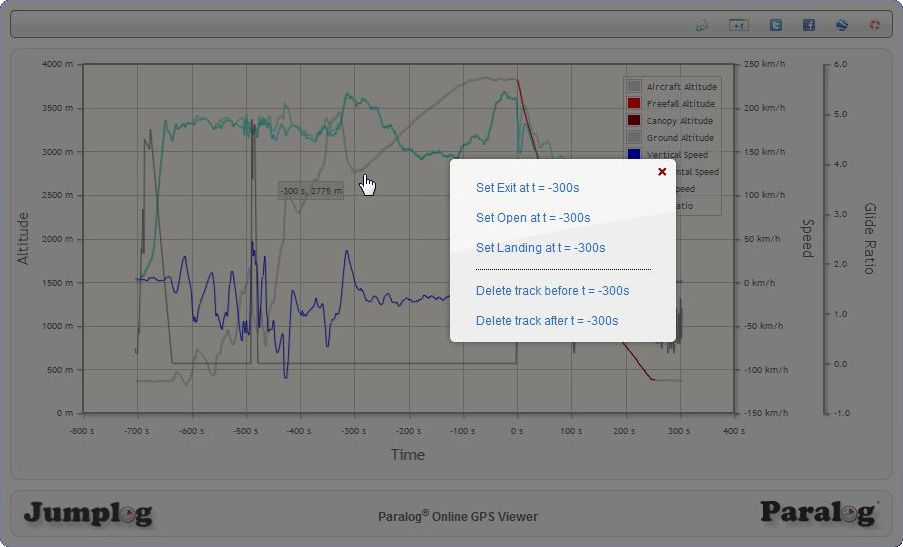 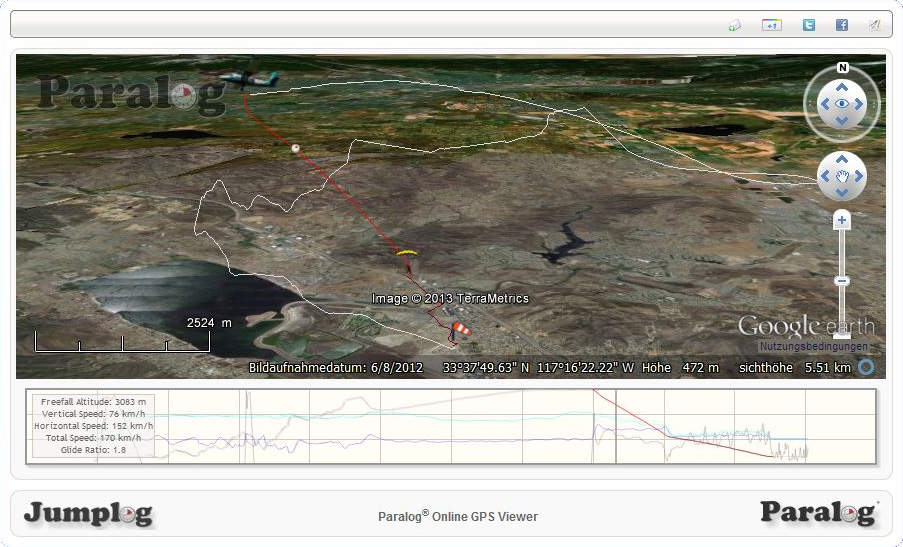 Access your jump log any time from any place the new Paralog Mobile client for Android and iOS.

The app is now available for iOS and Android from Stephan Beutel. 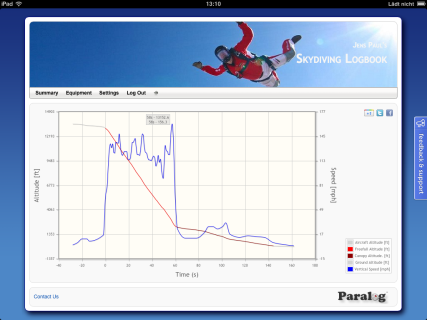 Although skydivers hate clouds, you have been bugging us to move Paralog there. We listened and released a cloud-based version of Paralog!

Jumps can be synchronized between Paralog and the cloud-based service. An interactive web interface is available for desktop, tablet and smartphone browsers to add, display, edit and sign jumps and to display 2D- and 3D-Charts of your jumps.

Dedicated Apps for iOS and Android smartphones have been developed.

Jumps, images and charts published on jumplog.net can now be shared easily on Facebook and Twitter. Examples can be found here.

Paralog now integrates with ´Skydiving Logbook´, an App by Tom Cain for Android & iPhone. Jump logs can easily be transferred between the desktop and the smartphone using Dropbox. Detailed instructions can be found here.

With these latest addtions, Paralog continues to support latest developments most requested by our users while still supporting all freefall loggers available on the market as well as most consumer GPS and the only GPS designed specifically for skydivers.

With these latest addtions, Paralog continues to support all freefall loggers available on the market as well as most consumer GPS and the only GPS designed specifically for skydivers.

Other changes for version 5.4:

Paralog 5.3 adds support for the new N3A audible by Alti-2 as well as the AltiTrackfrom Larsen & Brusgaard.

With these latest addtions, Paralog now supports all freefall loggers available on the market as well as most consumer GPS.

Other changes for version 5.3:

The competition will have three different ways of judging (depending on what you like) for time, distance or highest (ground/forward) speed, and doesn't use time, but rather a set competition window of 3km/2km for judging.

Though still subject to wind, it should be a more honest comparison/friendly competition (or just monitoring your own performance) than the time based method other websites/competitions use.

In combination with the (either full registered version or demo) Paralog, users will be able to upload their tracks from either GPS (time/distance/speed) or Neptune and ProTrack (time).

Next to the online competition, the website can also serve as a base for your dropzone competition on any of the sub-disciplines. All you need is a plane, people wanting to fly, some GPS or Neptunes/ProTracks and a working internet connection.

If you want to organize a cool competition at your home DZ, one email is all it takes to get started!

Though respecting the time and effort put into this, it is of course appreciated if you choose to order a full version of the software (with which you also get access to the many other exiting features).

Both in the demo and full version, all you need to do it hook up your GPS, import the data and click the submit to PPC button. The software will do all the cleaning/cutting of the data to the needed bits for you. Meaning there is no complex technical nerdness required to participate.

Detailed instructions are available on the PPC web site.

Paralog 5.0 is not only a new major version, it is almost a completly new software featuring a completly user interface, an integrated 3D view of GPS tracks, a companion version for Windows Mobile and support for the new N3 by Alti-2.

mjnSoft, known for it's line of electronic logbooks for paragliders and general aviation on different platforms, has formed a strategic partnership with Paralog. As the first result of this partnership, Paralog for Windows Mobile has been released.


Paralog at the PIA Symposium

A new version of Paralog, the world's leading skydiving logbook and flight analysis software, has been introduced at PIA and was well received. Most noticeable changes are the fresh user interface, integrated 3D view of GPS tracks, a companion version for Windows Mobile and support for the new N3 by Alti-2.

As most Neptune users on OSX are painfully aware, support for IR-USB adapters has been suspended starting with Tiger. David Fowler found an interesting solution to this problem:

I have since come up with a direct solution. The two problems I had were 1) existing USB IrDA adapters don't have Macintosh compatible drivers, and 2) Serial IrDA adapters require more power than is available from USB-to-Serial adapters.

Thanks to the determination of Robie Basak, some bugs have been fixed in the Linux IR stack, enabling Linux to connect with Neptune. This fix should make it into the next kernel, until then contact us for further details and instructions.

Paralog 3.1 has been released, further leveraging the integration of GPS and Google Earth:

Support for Intel-based Mac computers has been introduced with Paralog 3.1.

In addition to reading data in GPX format, Paralog now supports direct download of GPS tracks from compatible units through the integration of GPSBabel. Currently, download from Garmin and Magellan devices is supported, while DeLorme GPL files can be imported directly into Paralog; others can be added based on demand.

Google Earth has been integrated with Paralog for interactive 3D display of GPS tracks on Windows and OSX. Google Earth combines satellite imagery and elevation data for the whole planet creating a virtual globe inside your PC with high resolution data available for most populated places. Google Earth allows you to zoom, pan, tilt and rotate your view to explore the earth and even fly across the landscape.

With Paralog, viewing a GPS track in Google Earth is just a mouse click away: Simply click the 'Show 3D-Map' button in the new jump profile view to export and open your jump track in Google Earth and view it interactively in 3D using all the features of Google Earth: tilting, panning, zooming, even flying along your flight path! You can save and share your tracks and add your own annotations.

All this works with the free edition of Google Earth. The 'Plus' version, which is usually required to import GPS data is not necessary, saving you $20/year in registration fees!

Other enhancements include an improved user interface, support for the new Skytronic GFX, automatic logging of rig information based on the jump type recorded in your freefall logger and quickly creating and changing log files for better support of multiple loggers.

Working closely with well-known wingsuit flyers and swoopers, GPS support has been introduced with Paralog 2.1. Paralog can import GPS data in the standardized GPX format, automagically extract the usual jump details like exit and open altitude, delay, etc. from the raw GPS data and display all the additional information available from GPS (horizontal distance and speed, glide ratio, course, etc.) in the enhanced jump profile view. This new and unique feature makes Paralog the first software to leverage the possibilities of modern of-the-shelf GPS units specifically tailored for the requirements of skydivers!

Another major enhancement is the 'Template Based Jump Log Export': Jump logs can be exported to arbitrary formats (e.g. HTML, CSV or SSA) through flexible templates which can be easily customized by the user. The integrated FTP client allows for easy and seamless uploads of the generated files, e.g. to a web server. Four ready-made templates are included: HTML format using a plain, tabular view, HTML format using a menu driven, fully linked view with totals, jump details and lots of charts and graphs, CSV format to import into spreadsheet software, e.g. Excel and SSA format to generate video subtitles with VirtualDub. Note: This upload feature has been replaced by synchronization with jumplog.net.

Development of a 'Small Devices Version' of Paralog for PocketPC, Smartphones, etc. has started. Contact us for details.

Paralog is now available as a boxed CD version at a dealer near you. The CD contains all the downloadable software from this site, including an easy-to-use multi-platform installer. A single user, single logger license is included in the package.